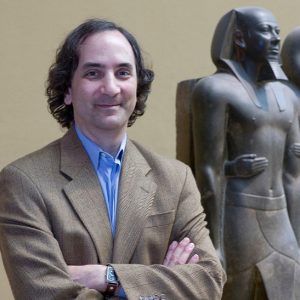 Director :: Harvard Museum of the Ancient Near East
Barbara Bell Professor of Egyptology :: Department of Anthropology

Peter Der Manuelian is the Barbara Bell Professor of Egyptology at Harvard University and holds a joint appointment in the Anthropology Department and the Department of Near Eastern Languages and Civilizations. He came to Harvard in 2010, after a decade at Tufts University. He also served on the curatorial staff of the Museum of Fine Arts, Boston, since 1987, and held the position of Giza Archives Project Director there from 2000 to 2011. In addition to Giza, his Egyptian archaeological and epigraphic site work includes New Kingdom temples at Luxor (Epigraphic Survey, Oriental Institute, University of Chicago), and the Predynastic site of Naqada.

His primary research interests include ancient Egyptian history, archaeology, epigraphy, the development of mortuary architecture, and the (icono)graphic nature of Egyptian language and culture. He has published on diverse topics and periods in Egyptian history, but currently focuses on the third millennium BC, and specifically on the famous Giza Necropolis, just west of modern Cairo.

Interested in both ancient and modern graphic design—publishing in the broadest sense of the word—he believes in bringing new technologies into his research and into the classroom. Recent efforts have focused on visualization, and 3D immersive technologies as an aid to archaeological research. Among his current projects are the publication of elite Giza tombs west of the great pyramid, a biography of Harvard archaeologist George A. Reisner (1867–1942), and the development of immersive teaching tools for Egyptology and archaeology.

Bringing the Giza Pyramids to Life