Bringing the Giza Pyramids to Life

3D or not 3D? That is the question. Egyptologists and digital artists discuss the advantages of navigating on screen through archaeological sites in 2D, versus donning 3D glasses for an even more immersive experience. Using 3D computer animation and digital artistry to reconstruct the ancient Egyptian site of Giza, arguably the most famous archaeological site in the world, the Giza Project at Harvard is bringing the site back to life on screen. This is happening at Harvard’s Visualization Center, located in the Geological Museum. Project staff, along with partners at Dassault Systèmes in Paris, are making it possible for students and researchers alike to become “participant observers” in the burial rites carried out by avatars of ancient Egyptians, and to experience the ancient landscape and monuments in real-time as never before. Both amateurs and experts enjoy the benefits of travel in time and space, the results of a collective and ongoing effort of the team, under the direction of Peter Der Manuelian, Philip J. King Professor of Egyptology and Founding Director of the Giza Archives Project at the Museum of Fine Arts, Boston. From 2000 to 2011, the Project at the MFA was benefited from more than $3 million in support from the Andrew W. Mellon Foundation. Part of the beauty (both artistic and scholarly) of the team’s forays into ancient Egypt is the excitement the 3D Giza site can encourage among its viewers, from amateurs to visiting Egyptologists of international renown. Beyond visitors’ initial (overwhelmingly positive) reactions, the Giza team members are gathering detailed feedback from scholars to improve the interface and experience. The Giza model also allows us to pose new research questions and new ways of viewing the site, both from above and below ground that were previously impossible. 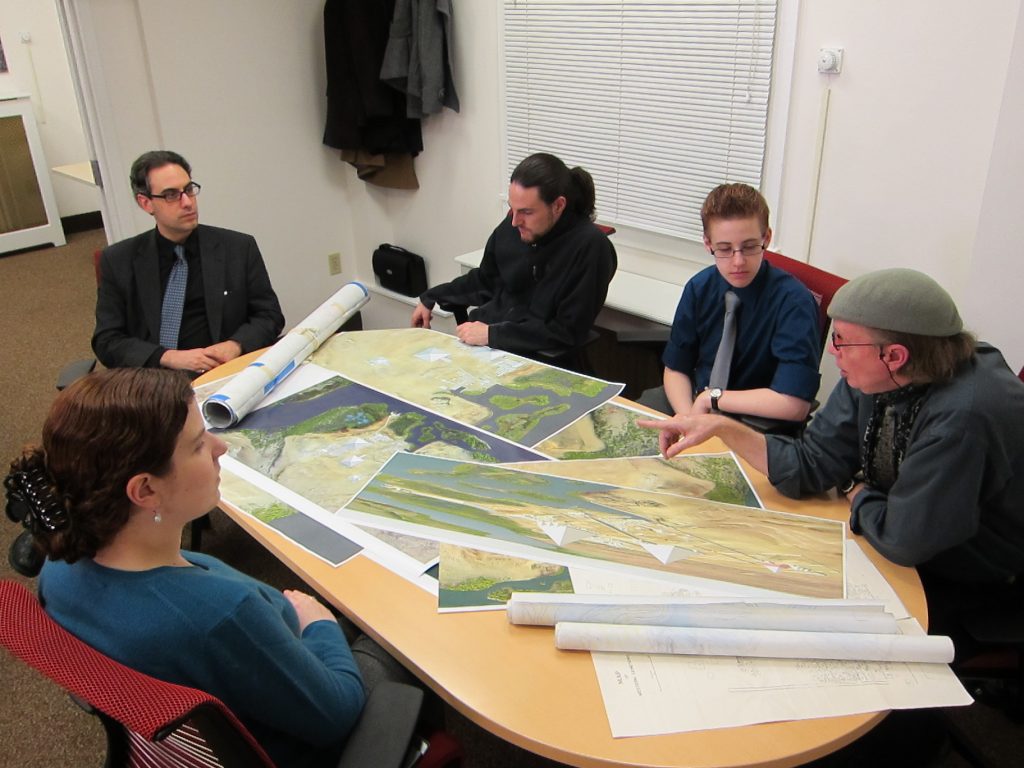 Egyptologists Nicholas Picardo and Rachel Aronin, Giza Project Research Associates, work closely with the team´s technical artists, Rus Gant and David Hopkins, to ensure that all the structures and objects from the Giza Pyramids, temples and tombs are represented as accurately as possible on the Giza 3D model. They are updating and cross-referencing data from more than a century’s worth of maps, photos, expedition diaries, objects and other materials of the groundbreaking excavations led by George A. Reisner (class of 1889) for the joint Harvard University–Boston Museum of Fine Arts Expedition (1905–1947). Current excavation data are also being incorporated, as are Giza materials from a consortium of international collaborative partners from institutions in Berkeley, Berlin, Cairo, Philadelphia, Hildesheim, Leipzig, Turin, and Vienna. 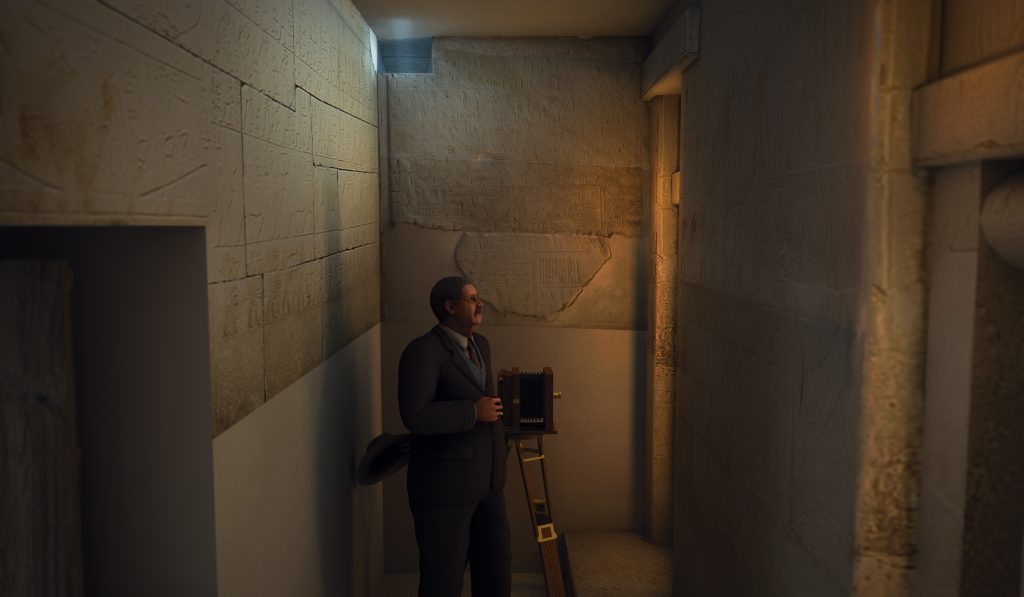 But what is an accurate digital representation for a tomb that is more than four thousand years old? Hopkins and Gant note that where a damaged column of hieroglyphs appears on the tomb chapel wall of Queen Meresankh, colleagues Aronin and Picardo could theoretically reconstruct the missing signs based on Egyptological research. What, then, should be the conventions for displaying reconstructions of hieroglyphs? Manuelian dreams out loud, raising the possibility of introducing a timeline mode that would allow users to scroll from four thousand years ago to the present and back again, displaying the site in its original and current states, with many phases in between. Moreover, Manuelian raises the possibility of “crowdsourcing” selected monuments so that Egyptologists and digital artists from around the globe could get involved in populating the site with additional data at a faster pace. Gant notes that crowdsourcing was unimaginable ten years ago when the Giza work began. Today, powerful bandwidth and widespread access to the same digital tools and formats have leveled the playing field among research centers around the globe.

Digital reconstruction of the subterranean tomb chapel of Queen Meresankh (G 7530-7540), discovered by the Harvard University–Boston Museum of Fine Arts Expedition in 1927. Image courtesy of the Giza Project.

The research possibilities for the Giza 3D model have also increased dramatically. “We have now come to the point where we are no longer just using research in order to build a visual model,” adds Picardo, “but we are also reversing the process, taking the model and using it for research.” This is the “future of digital archaeology,” he contends, noting that it is “a pioneering effort in the field of Egyptology.” Already, images from the reconstructed models of selected Giza tombs grace Manuelian’s scholarly publications, including, most recently, Mastabas of Nucleus Cemetery G 2100. Manuelian and Gant also envision expanding accessibility to an even larger public, making the work available to visitors on the Giza Plateau itself, and in the forthcoming Grand Egyptian Museum, scheduled for completion a few years from now, as well as in museums at Harvard and elsewhere. 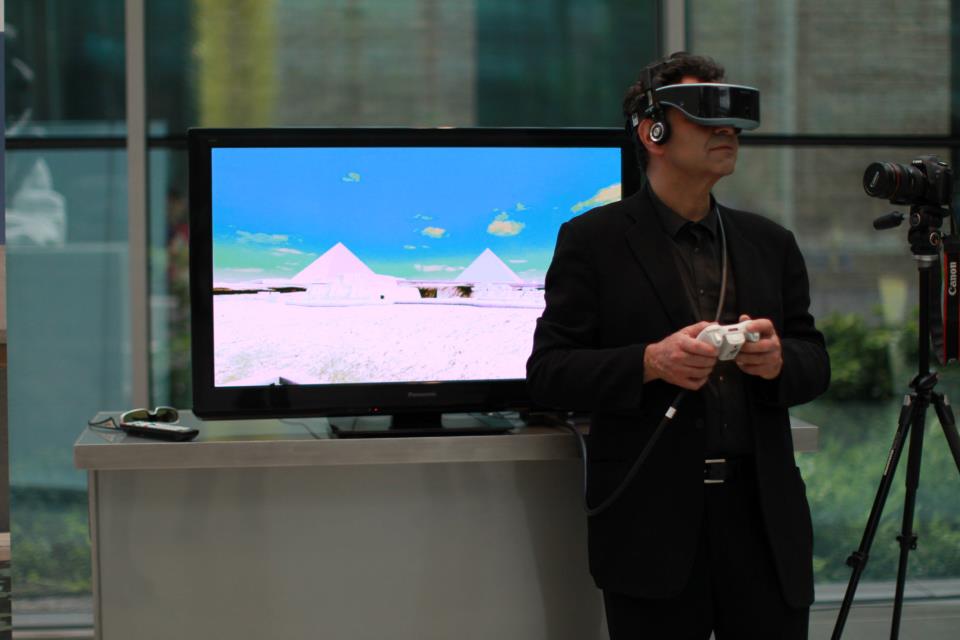 A museum visitor experiences the immersive environment of the Giza Plateau. Photo courtesy of the Giza Project.

The Giza Archives and Giza3D visualizations are at an exciting juncture in research, development and dissemination, with possibilities applicable to HarvardX and EdX as well. Aronin smiles as she acknowledges the Sisyphean task at hand; though the current crop of team members may not be able to render the entire repertoire of the Giza Plateau’s temples, tombs and artifacts in 3D, they will nevertheless set the stage for the next generation of scholars to come.