For her senior thesis, Jean Ryoo created multimedia and “experiential” installation pieces that incorporated video and sculpture into spaces through which her public had to crawl, almost childlike. On their hands and knees, they made their progress into a small, cushioned room and were confronted with mystical creatures that were juxtaposed to video and projected stills of urban decay. Speaking of her artistic intent at the time, Ryoo laughs, adding, “I wanted my pieces to be interactive. For groups to physically touch, engage with the material” and bring to the proverbial table their own knowledge and experience of myth and chaos. Jean Ryoo (´02) may have been engaging in a form of “participatory sensing” well before teams of high school students were setting forth with their mobile devices in the streets of Los Angeles to collect data and make sense of urban life in their communities. Now a PhD Candidate in Urban Schooling at the Graduate School of Education at UCLA, Ryoo works with a team of educators to overcome the vacuum of computer science education in underserved, urban schools by expanding access to a comprehensive and introductory program in computer science while addressing the biases of a social imaginary that have upheld certain White or Asian Males as archetypal Computer Scientists.

According to Mobilize CS, a collaboration between Exploring Computer Science, the UCLA’s Center for Embedded Networked Sensing, UCLA Center X, and LA Unified, “participatory sensing is an approach to data collection and interpretation in which individuals, acting alone or in groups, use their personal mobile devices and web services to systematically explore interesting aspects of their worlds ranging from health to culture.” In retrospect, Ryoo muses, her undergraduate thesis would have benefited from the kind of technology that her students are now using within and without the classroom on a daily basis.

Soon after graduating from Harvard College in 2003, Ryoo moved to La Réunion, a French Island in the Indian Ocean, east of Madagascar, to teach English at public schools there. Her official title may have been “Assistante de langue” but, as there was no English teacher to assist, Ryoo was able to develop her own curriculum and teaching materials. “The French government was very kind and supportive, but it was a situation in which the job description did not fit the actual responsibilities. But I had a wonderful time!” The experience allowed Ryoo to answer her true vocation, teaching. Before La Réunion, Ryoo had volunteered her time as a tutor through the Phillips Brooks House Association, though at the time it had never crossed her mind that teaching would be her future career path. It had always been “the fun thing you do in your free time.”

Upon her return to the U.S., Ryoo applied and was accepted to the University of Hawaii at Manoa´s teacher education program. She was attracted to their program because of its overarching philosophy that teaching is an act of social change. (She also admits to an enduring affection for island life.) Effecting social justice through teaching became an overriding concern for Ryoo during the year in which she applied to graduate school. She taught at a Charter School in Roxbury for one semester and returned to her hometown, Los Angeles, in the spring to work for the Champions Afterschool program where she taught Art at elementary and middle schools and took kids hiking on the Santa Monica trails on the weekends through the Adventure program. There she witnessed some of the disparity in access to physical education among communities of color in Los Angeles. Ryoo notes that one of her advisers, Jane Margolis (Harvard Ed.D., Class of 1990), forcefully compares the current and historical inequities of swimming education in communities of color to the lack of access to computer science education in Stuck in the Shallow End: Education, Race and Computing (MIT Press, 2010).

In Hawaii, Ryoo earned her certification in secondary English and Social Studies teaching and taught at a local high school. The experience confirmed her belief “that teachers have an incredible power and privilege to effect change from within the classroom, but I became frustrated with the limitations of what I could do […]” She also read extensively from Paolo Freire´s work in critical pedagogy which inspired her to return home to pursue a PhD in Urban Schooling at UCLA. There she joined the Exploring Computer Science (ECS) team (led by Jane Margolis), which does advocacy work and curricular development to promote computer science as one of the core cognitive skills. Ryoo is passionate about promoting computer science critical computational thinking through computer science, observing that “if we don´t understand how digital media and algorithmic thinking work, we will continue to be uneducated consumers of other people´s inventions. We teach people to read, why don´t we teach a deeper understanding of CS and its workings? Obviously, I don´t feel that everybody should become a computer scientist, but everyone should have a working knowledge of it and an understanding of the problem-solving skills.” Ideally, computer science education could start in middle school or even elementary school but for now the program is focused on high schools because it is the more immediate stepping stone for college and pursuing a career in CS, if students so choose. 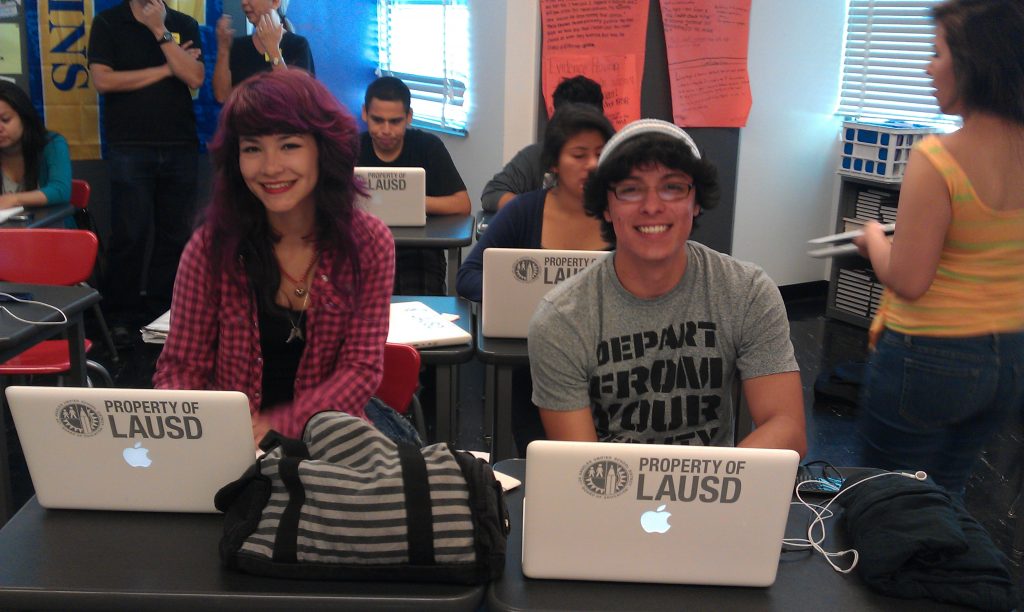 In addition to developing a CS curriculum for all, the ECS program includes a professional learning community for ECS teachers. Currently, all CS instructors are teaching out of subject in addition to their core subjects (chemistry, history, English, etc.) for which they are certified. This can make teaching CS classes a solitary and daunting experience. Exploring Computer Science brings teachers together once a month and during the summer to build community through professional development. When Ryoo started working for ECS in 2008, six teachers were involved and now twenty-nine schools from the Los Angeles Unified School District (L.A.U.S.D.) work with the program; Chicago public schools are currently teaching ECS and a recently funded project is supporting the development of ECS in Washington DC schools as well. 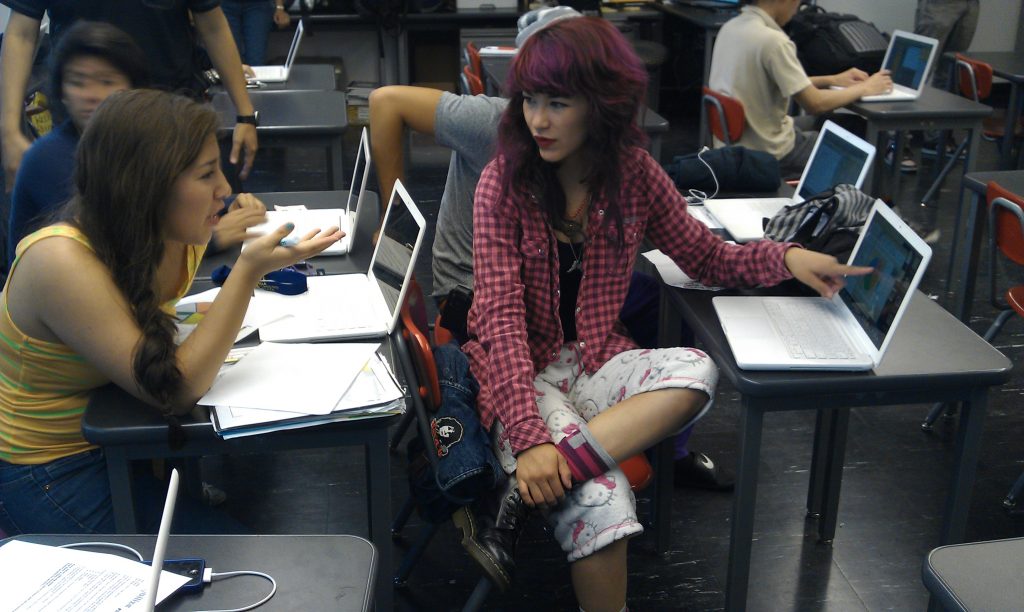 Before Exploring Computer Science developed its core class, computer science offerings in LAUSD public schools offered typing classes and a privileged few had the option of Advanced Placement Computer Science. The ECS curriculum introduces students to several different topics over the course of a year: human-computer interaction, problem solving and algorithmic thinking, web design (html and CSS), robotics, animation and game design with Scratch (a visual programming for beginners invented at MIT), and data analysis. Ryoo´s dissertation research focused on the use of mobile phones in the context of the data analysis unit in schools around the city. Students use mobile phone apps and web servers to conduct community research. Learning to use and analyze the data they collect, they then create their own narratives of this experience. For Ryoo, one of the most memorable projects was that of a student who used mobile phone apps to analyze billboard advertising in his community and snacking habits at his high school. In an effort to understand whether or not neighborhood advertising might be affecting health-related behaviors at his school, he created a website that explored all data collected by his class. Through this work, he learned to have a critical eye for data analysis, recognizing how a causal relationship between advertising and snacking could not be made with the limited amount of data collected. However, this student completed the project with the empowering conclusion that he didn’t have to ‘wait for CNN’ to learn about the world, but now understood how to be a researcher himself. It is a clear example of the inquiry-based approach that is the basis for the curriculum developed by Gail Chapman and Joanna Goode. As Ryoo elaborates, “collaborative group work and hands on projects draw from students’ questions so that a much deeper learning happens through that process, rather than through rote memorization. Students will come across CS ideas and methods in the process of trying to tackle other problems. It´s about listening and giving value to the knowledge and experiences that students already have, before entering the classroom, instead of treating them like a clean slate.” 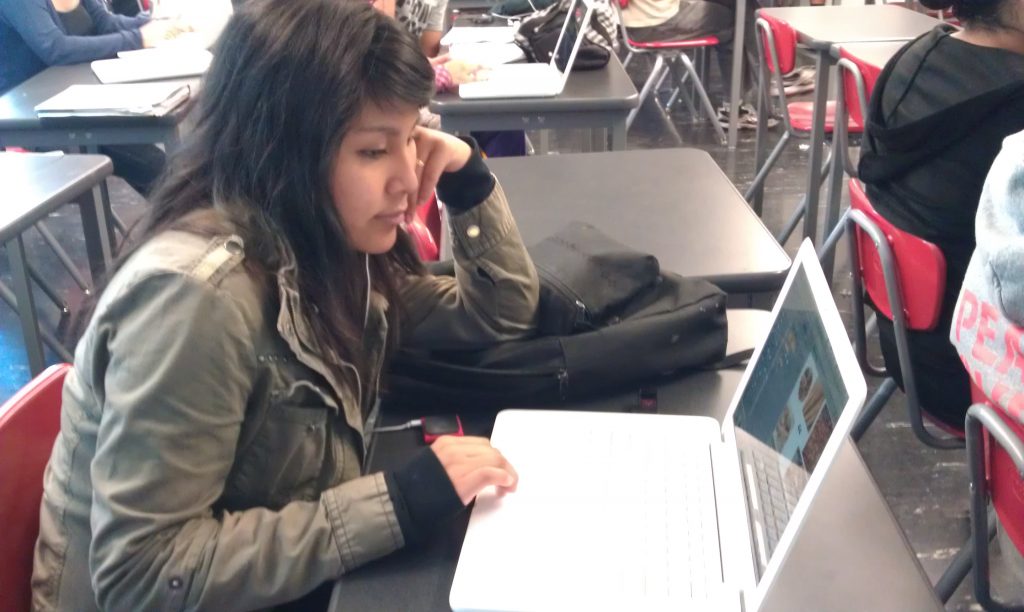 As a participant observer in the CS classroom, Ryoo notes the difficulties for teachers using an inquiry-based approach for the first time. “In many respects, it´s about letting go…allowing your classroom to get noisy, realizing you won´t have all the answers to students’ questions. Having a good sense of humor is definitely important!” She also has to strike a balance between observing and promoting good practices, such as reminding teachers to call on girls as much as boys. One unexpected result from the program: teachers are also using the skills and practices learned from their professional development for CS teaching in their core subject classrooms.